Luzhou Port: The whole process has been paperless, informatized and intelligent

The Luzhou Port in August is very lively, with ships passing by on the waterway. 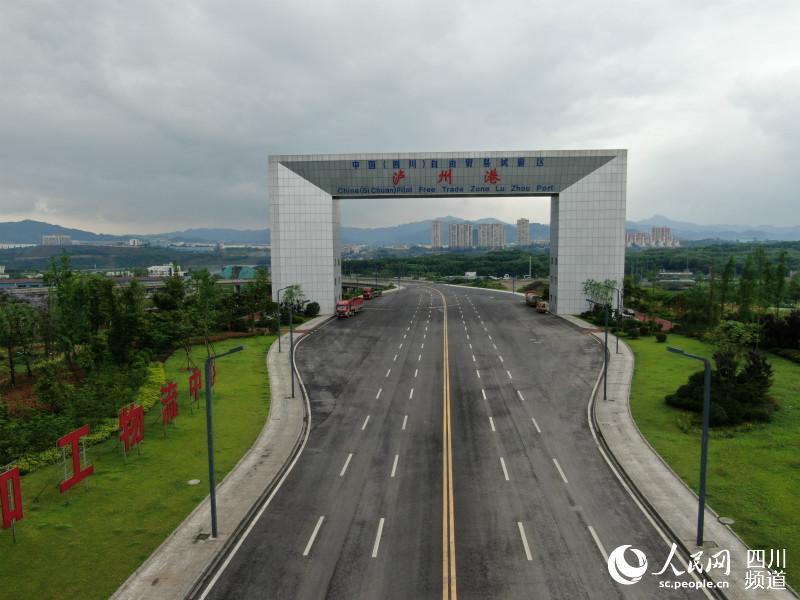 The Luzhou Port in August is very lively, with ships passing by on the waterway.
Luzhou Port is the largest port for water transportation in Sichuan and one of the 28 major inland river ports in the country. Its economic hinterland covers the Sichuan, Yunnan and Guizhou regions. It is an important hub node connecting the Yangtze River Economic Belt and the Silk Road Economic Belt, and is also a free trade experiment in China (Sichuan) The south Sichuan Lingang area fully implements the test tasks, promotes reform and innovation, and promotes the creation of an important support for a new pattern of three-dimensional and comprehensive opening up in Sichuan.
According to Huang Jing, general manager of Luzhou Port Company, Luzhou Port, as one of the key construction ports on the upper reaches of the Yangtze River identified by the state, covers an area of ​​approximately 1,000 acres, has completed a cumulative investment of more than 1 billion yuan, and has 6 3,000-ton multi-purpose vertical frames. With a berth and a container yard of more than 400,000 square meters, it has an annual throughput capacity of 1 million TEU containers and 3 million tons of general cargo, and the largest single-piece lifting capacity is 120 tons. The port area is 3 kilometers away from the Ring Expressway, and the special railway for entering the port is directly connected to the port yard. The entire process has been paperless, informatized, and intelligent, and has complete modern port functions. The external collection and distribution system of Luzhou Port is sound, and the multimodal transportation of rail, highway and water is seamlessly connected.
Luzhou Port now has functional platforms such as a bonded logistics center (Type B) and designated ports for entry of grain. It has successfully been approved for the pilot port of departure tax rebate policy and officially put into operation the designated supervision site for imported meat. Foreign trade ships can enter and exit Luzhou Port temporarily. In 2019, Luzhou Port's foreign trade container volume reached 49,000 TEUs, an increase of 34.9%, and the iron-water intermodal container volume reached 41,000 TEUs, an increase of 17%, ranking among the top 10 sea-rail container terminals in China for many consecutive years.
During the interview, the reporter learned that in the future, the Lingang area of ​​southern Sichuan will also focus on the “five major areas” of customs, maritime affairs, taxation, finance, and government services, and actively leverage comprehensive bonded zones, cross-border e-commerce pilot zones, designated ports for imported grain, and With the advantages of national open platforms such as imported meat inspection sites, we will focus on competitive industries, continue to deepen and promote institutional innovation, and provide companies with a better business environment.
On December 20, 2019, the Luzhou Comprehensive Bonded Zone was approved by the State Council for establishment. The Luzhou Comprehensive Bonded Zone is located within the Lingang Area of ​​Southern Sichuan in the China (Sichuan) Pilot Free Trade Zone, from the west bank of the Longxi River in the east, to the Chengzi Luchi Expressway in the south, to the Luzhou Port Port Railway in the west, and to the Second Yangtze River Bridge in the north The connection line, including 0.4 square kilometers of built-up area and 0.6 square kilometers of unbuilt area, is an important platform for high-level openness and high-quality development of the Sichuan-Chongqing-Dunnan-Guizhou junction area and even the Chengdu-Chongqing double-city economic circle.
As of the end of July this year, the infrastructure construction has been basically completed, the area has achieved "seven connections and one leveling", and a total of 5 million cubic meters of earth and stone have been completed; the total length of roads built is 7.7 kilometers, and the total length of the fence is 7.5 kilometers. The checkpoints, information management system, supervision facilities and supporting facilities have all been completed to meet the acceptance conditions, and comprehensive preparations for acceptance will be carried out to ensure that the customs operation will be completed by the end of 2020.
Liu Guanghui, deputy director of the Southern Sichuan Lingang Area Management Committee, said that after the customs is closed, the Luzhou Comprehensive Bonded Zone will fully rely on the free trade pilot zone, the cross-border e-commerce comprehensive pilot zone and other open platforms to superimpose the advantages and the "water, road, rail, and air" comprehensive transportation hub Advantages, speed up the construction of the "five centers" of bonded processing and manufacturing, logistics distribution, R&D and design, inspection and maintenance, and sales services, and strive to build a demonstration zone for industrial transformation and upgrading in the upper reaches of the Yangtze River and an important bearing site for the gradient transfer of processing trade, and strive to create the province's economy for Luzhou A solid foundation will be laid for the sub-center, to accelerate the establishment of an important node city in the Chengdu-Chongqing double-city economic circle and a high-quality development pilot area in the Yangtze River Economic Belt.

China's foreign trade continues to maintain a steady growth momentum, imports and exports increase by 2.4% in the first 10 months

Where did Sichuan's annual foreign trade "best performance" come from